5 biggest streaming trends in 2022 so far 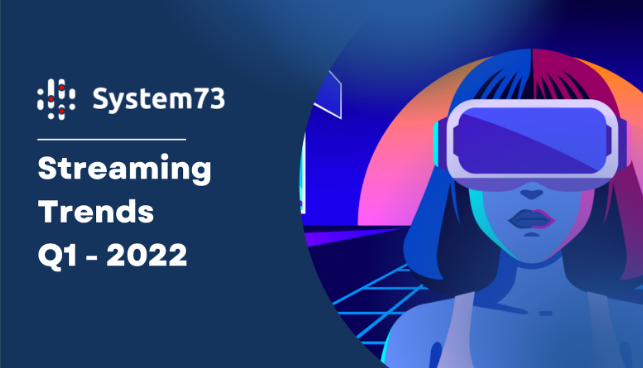 While the subject is still clouded in possibilities, the metaverse is entering the mainstream and allowing various broadcasters and streaming services to invest in it and explore new engagement options. Through virtual reality, augmented reality, and extended reality, video games, live sports, and even auction houses are experimenting with alternative content delivery routes.

There are projections out there that the Metaverse could reach $1 trillion by 2024, and right now, it is currently sitting around $47 billion. So, a combination of changing consumer habits as well as accelerating digital technologies has resulted in the Metaverse becoming more and more real. Facebook has just invested $10 billion alone into the metaverse with many companies looking to follow suit.

In April 2021, Epic Games raised $1 billion to accelerate metaverse's long-term vision, and by the end of 2022, there will be 1.1 billion mobile AR users worldwide.

To learn exactly what you need to know about the metaverse as a broadcaster, we can help you out here.

What’s happening in the metaverse?

The metaverse has spawned a online investment platform called Decentraland, a space where people and businesses can purchase virtual plots of land and proceed to build whatever online experience they please there. One example of this is Southeby’s Auction House. The world famous auction house has stepped into the metaverse and now sells art, NFTs and cryptocurrency there. The global metaverse real estate market is expected to grow by $5.37 billion during 2022-2026, however we’ll be keeping a close eye on how this changes in 2022. Dolby Laboratories have also announced the acquisition of Millicast, a developer platform that provides WebRTC-based ultra low latency video streaming capabilities that prepares them very well for the plunge into the metaverse.

Additionally, launching on Roku, StreamNFT is the first connected TV app devoted to NFT art. For that tiny fraction of the population who own NFT art, StreamNFT presents a software-based solution for getting your NFTs on a TV.

By installing StreamNFT from the Roku Channel Store and then logging in with their Ethereum-based wallet, a customer's NFTs are automatically downloaded from the blockchain, and optimized to display on all Roku-enabled streaming devices and Roku-platform televisions (about 60 million in the market, according to estimates).

Following Netflix’s announcement that they lost 200,000 subscribers in the first quarter of 2022, the online streaming behemoth also announced they suspect up to 100 million people are using their service through password sharing. It’s the first time Netflix has seen churn outpace acquisition of new customers since one of its first bull runs in 2012.

Netflix says a predicted 30 million of the users sharing passwords reside within the US and that they will begin a global crackdown soon. This problem has been a recurring problem for streaming services, one they’ve tried to emit with shared and family options at a slightly higher price, but it seems these ideas weren’t enough to deter people from sharing their login information with friends and family. Netflix acknowledged it has purposefully allowed generous out-of-home password sharing because it helped get users hooked on the service.

Deloitte predicted back in December that there would 150 million subscriptions cancellations in 2022. The streaming service currently has 222 million subscribers worldwide and predicts they’ll lose a further 2 millions users in the second quarter of 2022. ​​Earlier this year, Netflix began testing different ways to curb password sharing in Chile, Costa Rica and Peru. Executives said on the company’s earnings call Tuesday that it could expand the model it laid out in those countries, charging extra to accounts that share passwords out of home.

3. People are coming back to AVOD

Fighting password sharing is a hard task for companies that can only do so much to limit the problem without sacrificing the quality of experience for their actual subscribers. One option that is growing in popularity to fight this and open up their audience is moving to an ad-funded video on demand service (AVOD). Global AVOD revenue is actually expected to grow by 144% between 2020 and 2026 while tripling in the US during the same period.

Streaming viewers are also becoming more receptive to ads it seems according to data from Tubi. The streaming service has some of the lightest ad load in the AVOD space, only 4-6 minutes per hour of viewing. This gives advertisers increased brand recognition and recall in an environment where viewers are most receptive. As such, it’s not surprising that Tubi streamers are 10% more likely than the general population to state, “I like to look at advertising.”

Plex recently released two major updates: they became the only app where it's able to find any movie or show, acting as one window into all your paid and free streaming services. Plex is the first and only streaming platform to offer free ad-supported movies, shows, and live TV together with the ability to easily search for any title ever made and create a customized watch list for all the movies and shows you’re interested in,regardless of where they are.

With these new features there’s no longer a need to hop in and out of various streaming services, as Plex pulls it all into one easy-to-navigate window, making it a one-stop-shop for all of consumers favorite media.

The Super Bowl LVI that took place on February 13th in Los Angeles was the most viewed program of the first quarter of 2022 with 112.3 million people tuning in to see it. In fact, statistics sya that nearly two thirds of the United States tuned in to watch the L.A Rams best the Cincinnati Bengals.

Post-pandemic, live sporting events are starting to become much more of an attraction for audiences, meaning you’re losing some viewers to actual events as well as group viewings in bars, restaurants, and other public spaces. Some of the biggest players in the online video streaming space can’t wait to join the party. In the U.S., for instance, behemoths including Disney, Hulu, and Amazon have expanded their streaming deals with the National Football League—with Amazon having obtained exclusive rights to Thursday Night football.

Streaming at the same time was the Winter Olympics which took place in Beijing and saw Norway coming away with the most points and 16 gold medals. The average US audience size tuning in was 11.4 million users, which was in fact a record low, yet still brought in a huge audience over its 15 day showing. Elsewhere, ESPN’s total day viewership in the first quarter of 2022 was up 32% vs. last year to an average of 812,000 viewers (P2+), the network’s best for the first three months of the year since 2017.  The increase was even more pronounced in prime time—up 40% to 2.068M viewers.

5. People want to view on mobile

For a majority of people, mobile is now the preferred platform for viewing video content. The mobile channel has surpassed TV in growth, fueled in part by mobile networks’ rush to offer broadband and LTE services. Partnerships between streaming services and mobile networks are mushrooming. These partnerships offer customer incentives in exchange for increased content consumption.

Video content made up 66% of the total mobile data consumed in 2021 and more than $22 billion was spent on mobile video game apps in Q2 2022. In terms of screen time it definitely looks like mobile is starting to take the edge o TV viewing due to its accessibility and more reliable data bandwidth. In fact, more than 70% of users access YouTube on their mobile devices and the average viewing session lasts 45 minutes.

With the recent news of Netflix’s crackdown on password sharing and the metaverse’s game-changing possibilities, the first quarter of 2022 lays the foundation for an industry shakeup that could see more streaming services moving to an ad-funded model that focuses on minimizing latency and coding their video delivery network to prioritize mobile viewing.