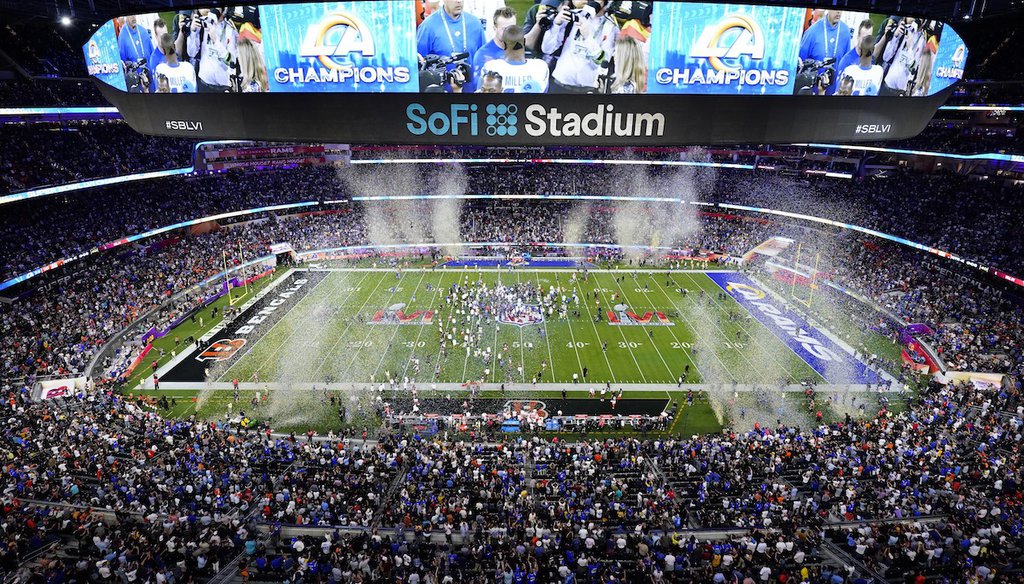 What did the numbers say about the first Super Bowl with a full stadium in two years?

More than 112 million people tuned in to watch the L.A Rams take on the Cincinnati Bengals at the SoFi Stadium on February 13, 2022. But how does that number compare to other years, where were people tuning in from, and which ads were must-see TV?

Following recent slightly underwhelming Super Bowls due to lack of atmosphere, repetitive finalists, and a constant shift between digital and linear viewing, 2022’s battle between the Rams and Bengals delivered in more ways than one.

A last-minute touchdown, an absolutely packed house, and the 2nd highest Super Bowl viewer numbers of all-time made for a great return for the NFL and NBC who hosted the broadcast in the US. According to demand-intelligence company PredictHQ, they expected viewing numbers could have reached as high as 117 million. That would have made this not only the most watched Super Bowl in history, but the most watched show ever. Sadly, that title stays with the 2015 Super Bowl (114.4 million).

But how do you break down that number and what does it mean for advertisers and broadcasters who want to learn more about sports streaming?

¼ US Households tuned in

Samba TV said 36 million U.S. households, representing more than 1 in 4 US homes, watched this year’s Super Bowl across linear television and streaming platforms. Those figures were good enough for a 12% increase in household viewership from last year’s game. That’s a stark improvement on last years’ viewing numbers which came in at the lowest in 11 years.

“In Q4 of 2021, every one of the top five television programs was an NFL game, and that momentum helped linear TV notch its first ratings increase since 2020,” said Cole Strain, head of measurement for Samba TV. They saw the same excitement boil over to this year’s Super Bowl between the Rams and Bengals too, making it the most watched show since 2015’s Super Bowl.

What’s interesting is that the home markets for each team varied significantly. Cincinnati was the second-highest audience market in the U.S. in terms of viewership and over-indexed the national average by 13% (behind only Boston at 15%). However, Los Angeles was only the 12th highest indexing market of the top 25 DMAs plus Cincinnati, with only a 1% over-index of the national average.

Of course, there’s an entirely different audience that are more interested in seeing Snoop Dogg and Dr Dre bring on a load of special guests than watch hours of a sport they maybe aren’t as big a fan of. This year’s halftime show drew in 29 million US households, beating 2021’s numbers by 19%.

60% of the US population see Super Bowl ads

The Super Bowl is the biggest advertising venue of the year, reaching up to 60 percent of the United States” population. That’s either during the game, rewatching videos online, or catching them in public spaces. That makes this an infamous spot for companies, being both an incredible opportunity for exposure, but at a cost of up to $5.5 million for a 30 second spot it’s not in the budget for every company. In fact, it could even go so well your website can’t take the traffic, like Wallbox’s case

Thanks to Morning Consult, we can actually find out what the most loved ad was at this year’s Super Bowl. The answer is “Push It” by Doritos/Cheetos. Morning Consult’s Most-Loved Ads Score was derived from a survey conducted the day after the Super Bowl which asked respondents to rank ads on a scale of 0-6 with 0 being “can’t recall” and 6 being “loved.” The Doritos/Cheetos’ ad featuring forest animals and the Salt-N-Pepper hit “Push It” got the highest score of 3.89. In second place, Budweiser’s “A Clydesdale’s Journey” received a score of 3.73.

In comparison, the topic most people were talking about on social media was cryptocurrency. Research from Nielsen shows that more than one-third of NFL fans are planning to buy cryptocurrency in the next 6 months. During the Super Bowl, FTX’s ad not only generated the most mentions (230.6K) of all the crypto ads, but also had the largest share of voice (6.4K).

More than 70,000 fans attended the game at the SoFi Stadium in Los Angeles, a group that were definitely close to the action, but missed out on some of the latest technology that virtually puts fans onto the field.

Virtual and Augmented Reality has been in everything from real estate to the Olympics to theme parks, so it was only a matter of time before this reached people’s Sunday afternoons too. The Super Bowl has been offering VR and AR experiences since 2017 when FOX Sports began broadcasting highlights in near real-time. That technology has since taken leaps and bounds forwards to the point you can now live the entire game through a VR headset on apps like Bigscreen. Bigscreen is a VR app designed to let you watch content with friends in the metaverse.

Over 2 mobile devices were connected to each IP Address

On average, 1.3 laptops and 2.2 mobile devices were connected to the same network per IP address for Super Bowl viewing households. These devices are considered live because they are browsing online and can be targeted with ads during the Super Bowl. However, in MIQ’s study, they also couldn’t find many examples of households with a large amount of devices connected, meaning people are far more likely to rely on data to stream the game and view their highlights.

When it comes to distributing content to people in a concentrated physical location like the Super Bowl and its attendees using a variety of devices, it’s crucial people are kept as involved in the action as possible. That means no buffering, no errors, and definitely no skipping touchdowns. If you’re interested in a way to keep track of your content’s performance analytics, manage your CDNs, or take advantage of revolutionary AI content delivery, Try out System 73’s Edge products.

According to Tunity Analytics, last year’s Super Bowl on Fox averaged 23.3 million out-of-home viewers (it should be lower this year).