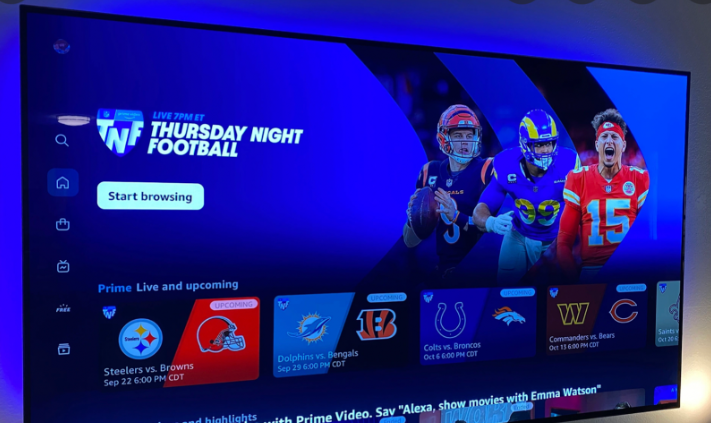 Viewers of Tuesday Night Football (TNF) complained of streaming issues during the first week of the National Football League season. A number of subscribers who logged in to watch Kansas City Chiefs play the LA Chargers reported problems with volume mixing, audio syncing, and buffering.

It is the stuff of any live sport streamer’s nightmares: The stream is out of sync. Viewers hear the commentator exclaim with excitement as one team scores. However, the image lags and the words of the announcer spoil the highlight of the game. This is exactly what happened for some fans of TNF and it is a cause of major concern that even Amazon could not avoid issues on the opening week.

This is the first time the NFL has allowed an entire set of games to be broadcast exclusively on a streaming service and Amazon is reportedly paying over $1 billion annually for the exclusive rights to TNF for the next decade. Amazon’s stream didn’t crash like those of its competitors during Sunday’s first week games and many viewers were able to enjoy the game without disruption. However, with fans already reluctant to sign up to Amazon Prime to be able to watch TNF at a cost of $14.99 a month or $139 a year or through Prime Video at $8.99 a month, this was hardly the start Amazon wanted.

Prime Video had performed well during preseason but the considerable increase in traffic for TNF threw the stream off more than anticipated.

This is not the first time an OTT platform has run into problems in the last year:

Sports fans are starting to get the impression that streaming services are simply not equipped to handle the pressure of their favorite games. Amazon will have invested a considerable amount of money in a multi-CDN solution to ensure their networks are not congested. However, the issue is likely to lie with the internet service providers (ISPs) that connect audiences to the CDNs. Many ISPs simply do not have sufficient traffic capacity, known as peering, to achieve this on such a large scale without running into problems. This means, even if the CDN or CDNs are enough to deliver the product, the network is still not able to give users what they’re paying for.

This can often be misunderstood by broadcasters who find themselves wasting resources as they look in the wrong place to find out what went wrong and how to fix it. The more complex the system and the more companies involved in the process, the more difficult it becomes to identify and solve the issue.

If streamers are going to establish the reliability customers expect, they must resolve the issue of visibility along their distribution channels. Their product is too valuable to rely on the same infrastructure that has let them down thus far. Therefore, they must find out what is going wrong and how to fix it before the quality of experience of the viewer is affected.

Solutions like Edge Intelligence allow for exceptional visibility by using AI to monitor the transmission from end to end, identifying congestion points and redirecting the data load across a P2P topology that allows data to be offloaded from CDN networks without affecting the quality of the stream. This means that the stream is distributed in the most efficient way possible and ISPs do not struggle under the weight of a stream with high quantities of concurrent viewers who lead to spikes in the network at key points in the game as happened in the case of TNF this weekend. This patented technology can ensure that fans do not suffer by facilitating managing congestion and distribution in a more efficient way.

How to future-proof your live stream delivery

Live streaming is constantly developing in real time and that does not only apply to the stream itself. As infrastructure, software and hardware develop, any company looking to excel in this field needs to be sure that they are asking the right questions when it comes to technology investment to make sure their expenditures will make sense for their future success. Follow these five simple steps to make your live stream delivery is firing on all cylinders, today, tomorrow and far into the future.